“I saw no temple in the city, for its temple is the Lord God almighty and the Lamb. The city had no need of sun or moon to shine on it, for the glory of God gave it light, and its lamp was the Lamb. The nations will walk by its light, and to it the kings of the earth will bring their treasure. During the day its gates will never be shut, and there will be no night there. The treasure and wealth of the nations will be brought there, but nothing unclean will enter it, nor any[one] who does abominable things or tells lies. Only those will enter whose names are written in the Lamb’s book of life.” - Revelation 21:22-27

Prayer: Lord, Cleanse and purify me that I may be found ready and worthy to rejoice in Your courts forever. Let the praise of my lips flow from a heart of gratitude for seeing the wonders of who You are. May I always marvel in wonder at the splendor of Your being and Your love for me and for all. Amen.

God gave the Temple so that all people, whether Jew or Gentile could worship Him and encounter Him at the Temple. The Jews were the chosen people of God, meaning that the salvation of all was to be opened up through them. Those who were gentiles had not entered into the covenant people of God, but there was still a place for them at the temple. The outer courts were for them to worship the one true God. As their faith and worship brought them closer to God then they could enter into the Jewish family. The distinction was not an absolute distinction, but one that would lead to their encounter and growth. Other distinctions were for the worship of God. There was the priest's court, an area for Jewish men, an area for Jewish women, an area for only Jewish people, and then the outer courts for the gentiles. Below is an image of the temple with the different distinctions. 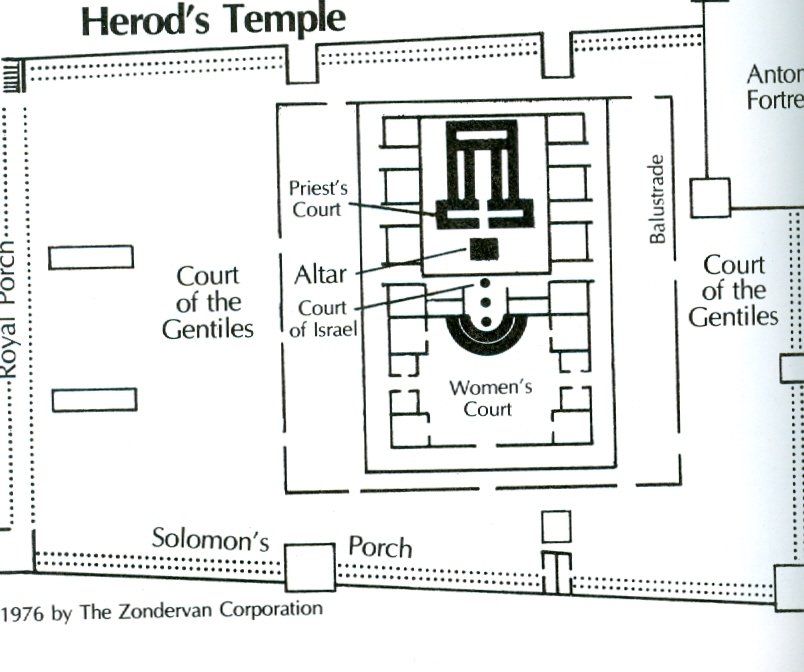 In our Gospel today, Jesus casts out the money changers and those selling animals for sacrifice. Animals were permitted because they would be sacrificed. What was an abomination is that the temple was made for worship. They were likely in the court of the gentiles, this place for the gentiles to come and worship. What Jesus came to do was to save all mankind and reconcile us back to God. The reason that He is there in the flesh is to accomplish this. To see this marketplace in the house of worship was an obstacle to His mission and an injustice to God.

As the dialogue of Jesus progresses in the Gospel, Jesus begins to speak of the temple of His body, which is part of God's plan of salvation. When you read the scripture of the new temple above from the book of Revelation in chapter 21, you see that there is no longer any distinction or separate courts. God has made our bodies a temple for Him, meaning that we have direct access to Him is we are baptized and this lived reality will be that much more glorious in heaven.

May God richly bless you!

There are no comments yet - be the first one to comment: